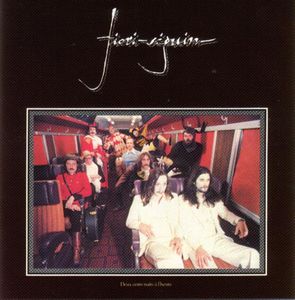 Harmonium was a pretty big Canadian prog rock band who operated somewhere between Genesis, folk rock and west coast rock. One of the mainmen in Harmonium was Serge Fiori. After the breakup of Harmonium after some great albums, he teamed up with another Canadian named Richard Séguin from the band Les Seguin. The result was this album which is said to be the best selling French-Canadian album of all times.

I do not know Les Seguin. But I know Harmonium and I see Deux Cents Nuits à l'Heure as a continuation of Harmonium and as their unofficial fourth studio album. That is my view on an album which is very similar in style to the Harmonium albums. In other words, the music here is pastoral symphonic folk rock with a lot of pop added to the mix too. It meanders nicely along the pastoral path without really impressing me. Some wailing choirs and saxophone is added to the pretty static guitar and keyboards sound. The vocals is great. But the songs are a bit disappointing.

This album does not really have any great songs and that is a pity. It is not on par with the Harmonium albums, quality wise. It is a bit light weight and commercial without coming up with great songs. But this is a good album and the sound alone makes it a great addition. But it is not really quite a great album. Check it out.