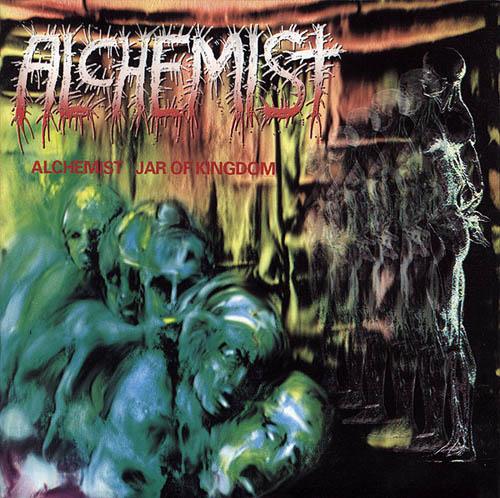 I remember this album from my final months in Norway before I emigrated to Scotland. I liked it a lot back then and woved to get back to it although I had lost my personal copy. I recently got hold of a copy again, the original version from 1993.

This is the debut album by this Australian band who releaesed five-six albums. The band is now in indefinate hibernation. That probably means split-up. But we never know. In sixty years time, a rocking chair version of the band may tour your shores. Make sure you catch these gigs.

Alchemist label themselves progressive metal. At Jar Of Kingdom, they mostly sounds like a deathcore band with some sampling and female vocals which takes them in the direction of avant-garde metal. But I feel the samples and the acoustic guitars does not really add any genuine avant-garde attributions to their sound. But this is not run of the mill deathcore, that's for sure. OK then, it is avant-garde deathcore. That and with some added sludge influences.

The music is based on downtuned guitars and on death growls. The music has this typical 'core sound. That makes this a pretty decent album. I am not entirely won over and this album does not impresses me. But for those of you wanting avant-garde with your deathcore, this is a perfect album for you. But not for me.