Edison's Children - Somewhere Between Here and There (2015) 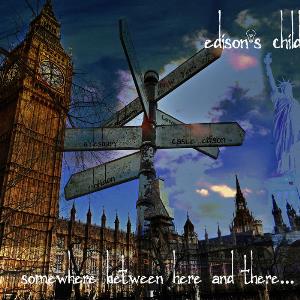 The third album from this multi-national duo.

Edison's Children is Erik Blackwood and Pete Trewavas. They do all the main instruments here. That means bass, keyboards, guitars and vocals.

They have got help from some drummers to fill the drum chair and three other musicians on xtra guitars and vocals.

I very much liked their first two albums In The Last Waking Moment (2011) and The Final Breath Before November (2013). Great neo-prog albums.

So I was looking forward to this one.....

... And received this album.

Eighty minutes. Thirty minutes of this album is original music. The remaining fifty minutes is remixes and live recordings.

And to make it a lot worse, the half an hour of original music here.

The music here is neo-prog too with overly emotional vocals. The music is mostly half-acoustic and rather generic. The vocals is pretty bad too.

This album reeks of sell-out and cashing in. I almost smell a get-out-of-the-record contract album.
A couple of the tracks is decent. The rest is bland, uninspired and frankly abysmal. Avoid !!!