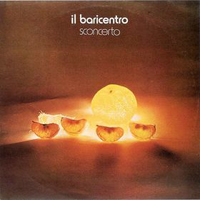 The band consists of three ex- Festa Mobile members and released two albums in their short time as this band.

The band was a quartet with a lineup of guitars, bass, drums, keyboards, percussions and drums.

Festa Mobile's one and only album was a crossover between Egg and PFM. Between Canterbury and RPI. I was not that impressed by this album in my Progarchives review.

Il Baricentro sounds like Soft Machine at their most jazzy and a lot like The Weather Report and other fusion bands.

Sconcerto is indeed a forty minutes long fusion album. It is not a live album either. It is very much a studio album.

This album is a mix of serenades, ballads and much more faster stuff. It is instrumental and all instruments plays their equal part. The keyboards does most of the work, though.

The music here is really melodic without being muzak or cheap commercial.

What is really missing here is some great melodies or tunes. There is none of those here. The music is good throughout and fusion fans will love this album more than I do. I very much like this album. But it is not among my best fusion albums.