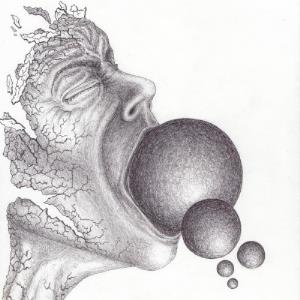 Edera is from Milan and they are a six piece band with a lineup of guitars, bass, drums, keyboards and vocals. English vocals, that is.

Edera has released two albums so far, their 2002 debut album Settings For A Drama and the 2005 follow up album And Mouth Disappears. Both of them decent to good. Check out my reviews somewhere else in this blog.

Edera plays neo-prog. The German take on neo-prog, that is. There are off course some English neo-prog connotations here too. But I would still put Edera down as a German style neo-prog band.

Valerio Valentini's vocals is very emotional and melancholic. That gives the music here a melancholic edge. The melancholic vibe can be found throughout the whole fifty minutes long album.

The songs are medium long. Between five and eight minutes long.

The songs are also well crafted. But they are also stucked in the verse-chorus-verse formula and there is not much else going on. The solos is not that good.

When that is said, this is not a bad album. It is indeed a good album. It is not that interesting album though and I am never blown away. This is a good neo-prog album. Check it out.