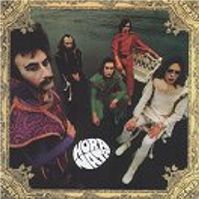 The one and only album from this Belgium based band.

The first ten minutes of this album gives most of the game away.

Both the opener You Always Like An Entree? and the short Try suite sounds like a Yes clone. A real, real Yes clone where a lot of Yes stuff has been nicked and repackaged into these two songs. It is kind of good for us who love Yes. But perhaps not so amusing for those who either take Yes too seriously or do not like Yes at all.

The rest of the album is still a lot about Yes. But the band has also incorporated a lot of jazz and The Beatles influences too. There is even some vaudeville stuff here too.

The alto saxophone gives the band a kind of an identity although that identity is faint and not at all strong.

I only got the LP version and that is a forty minutes long album. There is also a one hour long CD version too. These forty minutes are decent enough.

Neither Banzai or this album offers up much originality or even some good music. This is a half amusing album which is so obscure that it is worth checking out.