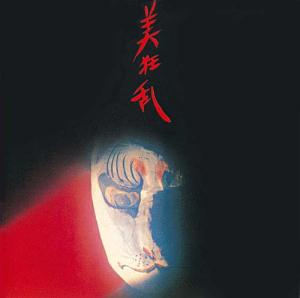 The debut album from this Japanese band who all in all released six albums.

The band was a three piece band on this album with a lineup of bass, drums, guitars and vocals.
They got some help from three guest musicians who contributed with mellotron, keyboards, recorder and electric violin.

The album artwork does not really tell you much...... besides of the hope that you may be in for an eclectic experience here. Maybe even an avant-garde trip to outer space.

Both yes and no is the answer.

The band sounds a heck like King Crimson anno Red on this album. The music is eclectic as heck here. The band is not copying King Crimson and the Red album. Not any other King Crimson album, for that manner. But....

Fans of King Crimson, get this album now !!  I will now continue this review for the rest of us.

There is a lot of strange and eclectic melodies here. There are five tracks here. This album clocks in at forty-two minutes too.

The sound quality is my really only gripe with this album. It is an album who delivers a lot and makes a prog rock heart skip some beats. It is not a great album. But it is still a good album.