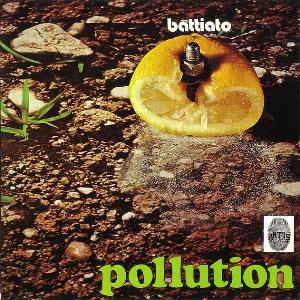 The second album from this Italian composer and artist.

I really did not like his debut album Fetus with that horrible album cover and awarded that a Turkey status. 1 point in other words.

Franco Battiato has returned to my speakers with his second album of in total thirty-two albums. I got some more of them. But I need a Franco Battiato break and will review those albums sometimes later, next year or so.

Franco Battiato does keyboards and vocals here. He is helped out by four other musicians on drums, guitars, bass and synths.

There is a lot of synths and sound effects here. Most of them sounds like a barking mad mental asylum. You get the feeling that Franco Battiato is very eccentric, creating very eccentric music. Hence, I need a break from his albums & world........

Again, we get a mad half an hour with him. There is a lot of Gong over his work. But Franco Battiato is much more distorted space rock than what Gong ever was. Gong was spacy enough. But much more cleaner and not so avant-garde as Franco Battiato.

This album is actually bordering to having an understandable concept. Well, I understand the music concept here. The music is spaced out into outer space and includes some mad sound effects. But there is a method in this madness....... me think.

The end result is a decent enough album. It is not a good album but it is still well worth checking out this album. Do that.