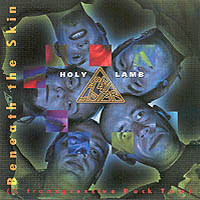 The fourth and so far the last album from this Lavian band.

The band started out as a thrash metal band and got a pretty substantial following. The band then turned around approx 180 degrees and went prog rock. Neo prog to be more precise.

This forty-five minutes long album contains five songs. The longest one, The Sea, is seventeen minutes long. That speaks symphonic prog to some of you. That includes ProgArchives who has this band listed as a symphonic prog band. I am not in agreement with them on this.

What we get here is some pretty eclectic prog. They have taken a lot of the Gentle Giant ethos and dragged it into a more neo-prog setting. There is a lot of things going on during these forty-five minutes. Bewildering much. A lot of different music styles gets a visit from this album. The instrumentation is guitars, bass, drums, keyboards and vocals. English vocals and the vocals are mainly male ones. Good male vocals. A female vocalist livens up the longest song here.

The album is a bit bewildering. But there is a lot of life and theatre on this album. Vaudeville rock is a good label here. The end result is a good album with a very good organ sound which I really like. This album must be checked out to be believed, that is for sure.