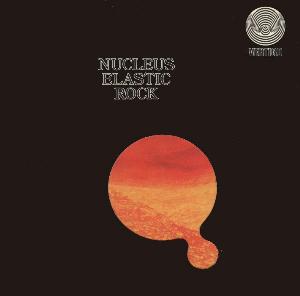 The debut album from this British band who went on to releasing fourteen albums between 1970 and 1988. I got three of their albums.

Nucleus was the nucleus of the British jazz scene in the early 1970s. Well, more or less. Two of the members here, John Marshall and Karl Jenkins, moved on to Soft Machine later on. John Marshall is now in Soft Machine Legacy and Karl Jenkins is a classical music composer who delivered music to the 2012 London Olympic games too. The leader of Nucleus, Ian Carr, sadly passed away a couple of years ago.

The band was a six piece on this album with both woodwinds and guitars as leading solo instruments. But most of the solos is done by the woodwinds. To the solo instruments, you can add piano, organ, bass and drums.

I am an unashamed Soft Machine fan and there is no doubts Nucleus falls into the same genre as that band. I am in familiar landscape here. Which is why I am not particular impressed with the first half of the album which features too much laid back jazz. I like my jazz a lot more intense than this. That is why I very much like the second half of this forty minutes long album. A far more intense twenty minutes of solos and hard bopping jazz.

The end result is a good album though and a positive impression of this band. I am very much looking forward to listen to the two other albums too and perhaps purchasing some more Nucleus albums too.