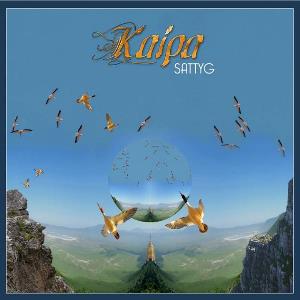 The twelfth album from this Swedish band.

The latest 2-3 Kaipa albums has had a very good standard without really being brilliant or even great. Some would even say they have become a tad formalistic. Well, that is what I am saying.

Hans Lundin is still the captain on the ship and the lineups is more or less the same as on Vittjar, their previous album. Ditto for the instruments.

Sattyg is still a bit of a style changer for Kaipa. Yes, we still get Swedish symphonic prog here in the good old vein. Kaipa is proving that they are the grand-fathers of that genre. But......

.... There are two very notable changes here. The female vocalist Aleena Gibson, who were more in the background on the other albums, has been pushed more to the foreground and has taken up a lot more of the vocals duties.

The other subtle change, more than a subtle change btw, is the move towards traditional Swedish folk music. Kaipa has always been leaning towards Swedish folk music anyway. On Sattyg, they have more or less embraced it. You can hear this in the guitar solos and everywhere in the music. The music is still mainly symphonic prog though......

The end result is a very good seventy minutes long album. It is not the most exciting album around and those looking for something more fresh and contemporary may look somewhere else. It is still a very nice slab of Swedish symphonic prog and one to fully embrace.