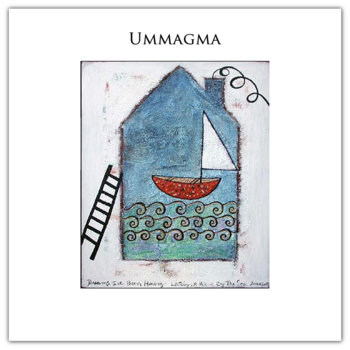 Ummagma is a very much talked about cooperation between Shauna McLarnon from Canada (Yukon province.... I did not know anyone lived there) and Alexx Kretov from Ukraine. They have so far released two albums. Both of them this year, in 2012. A review of the other one is coming up before the end of the year/can be found somewhere else in this blog. The band got extensive coverage in the last edition of Rolling Stone magazine and some coverage in this blog is an logical career progression.

Ummagma is catering for mostly everyone on this album. The basis is dreampop with Shauna McLarnon's ethereal voice. Her vocals is floating on the top of some electronica lounge-jazz eclectic progressive indie.... well, the typical post millenium progressive sound which both incorporate Bjork, Sigur Ros and Radiohead. All the music which our grand children will label classic progressive rock in the future while their GenesisCamelYes loving grandparents think this music is blasphemous new stuff. Roll over Beethoven and tell Tchaikovski the news.

The sound is good although I presume it has not been recorded in Abbey Road and Sir Paul McCartney neither play mandolin or bass on it. Shauna's vocals has got the place it deserve in the mix. Not too low and not too high. Belive me, but this is a very difficult balance to make and they have got it right. Not all songs are great here. Well, none are great. But this is a debut album and the band has set out their stall with this album. This is a very good album who lack some teeth. A bit more better melodies, hooks and "this is Ummagma" identity will hopefully be added to upcoming albums. Hopefully it is already there on their second album of this year. I think this is a very good album. See link below for this name your price album.