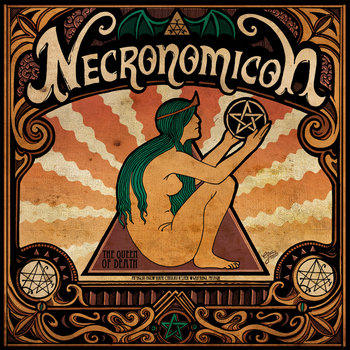 Necronomicon came to my attention because of my unhealthy interest in kraut and space rock. Some browsing and links from other bands lead me to this album and Necronomicon. Yes, it is a free Bandcamp album.

The cover artwork is great and gives a good 1970s vibe. Which this album has in abundance. The music is a mix of 1970s hard psych, krautrock and some doom metal. Mostly 1970s hard psych though. I thought this band was from Germany as the vocals sounds very German to me. But on closer inspection, the lyrics is in English. The songs are pretty long and interesting. They are driven by both Hammond organs, guitars, bass and drums in addition to some good vocals.

There is no real great songs here. But the album is well edited and I would had believed it without batting an eyelid if someone told me this album was released in 1972. It has that feel and ambience. The overall quality is good and it is a sure download for everyone into krautrock and hard psych. Link below.