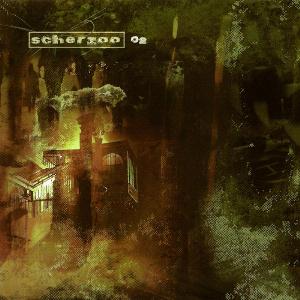 The second album from this Francois Thollot run band. He released two solo albums before he joined up with some other musicians and formed this band. The first album, very imaginative named 01, was released last year and that was a good album.

Scherzoo is listed as a zeuhl band in many 'pedias. Although there is some zeuhl connotations in both their albums, Scherzoo is by no means a zeuhl album. Darkened jazz with a lot of avant-garde, Canterbury and some zeuhl influences is my label on their music. Where the first album was saxophone dominated, there is a lot more Hammond organs on this album. The balance between Hammond organs, guitars and saxophone creates an entity which really works on this album. The music itself is pretty much RIO melody structures dominated. The mood is dark and brooding. The music is intense throughout. This is neither a trad jazz or a happy jazz album. To that extent, this can be labelled as a zeuhl album. I understand where this label comes from, let me put it like that.

The quality is very good to great throughout. Invasion is a great track. The other tracks is kicking thereabouts throughout. The music never becomes boring. Under some doubts, I award it a four pointer. A weak one. But albums like this is well worth promoting for a blog like this in a sea of mediocrity and hype.