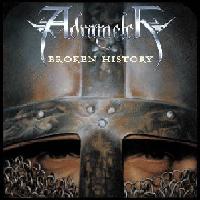 The second, third, fourth or I don't know album from this Italian band. The band has released an album earlier this year and I have got a copy of it. Hence this review too to tie up some loose ends.

I liked their 1988 album Irae Melanox which was a conceptional sounding power metal. Broken History is just power metal with all the cliches, all the ills and not much good music involved. Adramelch does not have much own identity and they follow the scene by copying it on this album. Helloween, Gamma Ray etc etc. Those are the bands you find a lot on this album. Even the vocals are very copycat like.

If you like power metal, you may find this album to your liking. There is not much orginality here though so I doubt it. A couple of good tracks does not make this album a total disaster. It is just boring though and I find it a decent album without any major flaws, but without any major positives either. Hence....