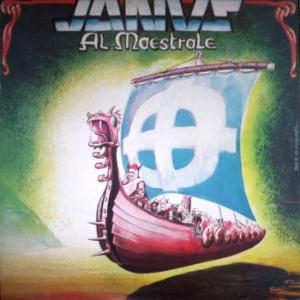 Janus was a band on the right wing side of the Italian political spectrum during the 1970s. That as a contrast to the left wing bands in the same scene. Bands like Area & co.

That is all fair enough. People was and is entitled to their own political views and this is not a political blog. The political bit is everything I know about this band. A band so obscure you really have to be big into Italian music to know about them.

The music is a mix of garage rock, punk, space and prog rock. Italian prog rock. The sound is pretty OK although the garage songs are pretty much tuned down as they are supposed to be.

I don't know the band members here or how many contributed to the album. The lineup is bass, drums, flutes, keyboards and Italian vocals. Not a lot of money has gone into making this album. It has a poor garage feel. A bit of a DIY and punk feel.

The end result is better than I feared. There are a few snippets of good stuff here. The punk thing is not my kind of tea, though. The album sounds like a collection of wildly different ideas. It feels a bit like a compilation album. The end result is a decent album which will never grace my record player again. But for those who likes this........