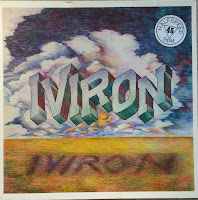 The one and only album from this German band. I believe it is a German band although it may be a French band.

The band released this album and then vanished without a trace. The band consisted of many members with a widely varied lineup. It is easier to list those instruments who does not feature here than those who feature here.

The album sounds like a compilation album too. It ranges from AOR to folk rock, fusion, RIO and neo-classical music. It has female opera and male AOR vocals.

The end result is a decent album, but not worth breaking into the bank for.