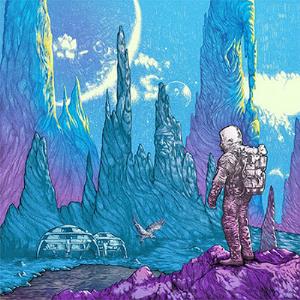 Yuri Gagarin is a five piece band with a lineup of synths, guitars, bass and drums. The music is entirely instrumental.

The band is named after the first man in space, the cosmonaut Yuri Gagarin from Russia. And the music too is in space. Space rock with a strong metallic edge. The sound is really dirty and spacy. The band is painting large pictures in their sound.

The music too is dirty with a lot of repetetive themes throughout this thirty-five minutes long album. The sound and music is really tight and does not leave much to the imagination. Distorted and clean guitars is driving the music forwards, supported by thumping bass and drums. Both the bass and drums is really dirty too.

This album got four songs and they are all good. Good if you really like space rock. Space rock with a massive, dirty sound. The music is a bit one dimentional though. But this is still a good album in my ears. I happens to like it.