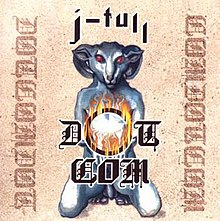 The twentieth album from these British masters.

Ian Andersson and Martin Barre was still here on this album who was their final album with original songs. Their next album, The Christmas Albums, had some Christmas standards and cover tracks.

The band was still playing around with world music on this album. That and some pop-rock. This in addition to their base camp in folk rock.

There is a lot of flutes and Ian Andersson's vocals here. There is also a lot of keyboards generated strings and other noises too. The band tries to be hip here. Most of this hip stuff does not work at all.

There are a few signs of the good old Jethro Tull here. A couple of the songs are good on this one hour long album. There are also some horrible songs here. I cannot understand why a band like Jethro Tull recorded a stupid song like Hot Mango Flush. Just to rub it in, we get this song in two different versions. A horrible experience for a Jethro Tull fan like myself.

This album leaves me a bit cold. Some bands goes out with their flag held high. Jethro Tull did not. This is probably their worst ever album. A very sad farewell from this band, it is.