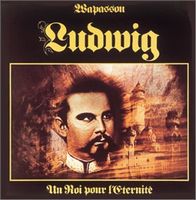 This album is regarded as their final good albums. The two final albums is generally regarded as very, very poor albums.

Wapassou is the band without any rhythm sections whatsoever. The band was a five piece band on this album and the lineup was violins, keyboards, guitars, synths and vocals. Female vocals and the vocals is more an instrument than spoken vocals. Da da da da da da sung on a repeated basis is not words which makes much sense. But solely as an instrument, they do. It is the universal language of music.

Hymn it is and the title track Ludwig is over half an hour long. It is a reasonable good song..... sorry, hymn. The other three tracks is very short and not particular interesting.

Wapassou is treading water in no-mans land. A bit too weird for the mainstream prog rockers and not weird enough and far too melodic for the avant-garde crowd. This album is a kind of a halfway house.

The title track Ludwig has enough going for it to maintain a bit of my interest. The other tracks are throw-away tracks. My verdict...... I regard this as somewhere between decent and good. There is simply not enough good stuff here to entertain me.  But check it out yourself on Youtube to see if you agree with me.