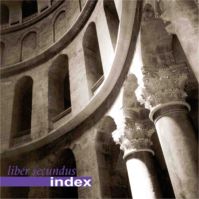 Index was a four piece band who emerged from the more known band Quaterna Requem. A band who has released four albums on their own. Index lineup on this album is guitars, keyboards, bass, drums and vocals.

The addition of vocals is a new string added to their bow after the debut album and the DVD. Their first album was OK although a bit dull due to the lack of vocals. Index has at least got a new focal point in these vocals.

This album is seventy-one minutes long. Which is a heck of a mouthful with symphonic prog somewhere between Camel, Yes, Genesis and local Brazilian prog bands.

There is some very long songs here. Two of them are over thirteen minutes long. The music is good enough and even very good at times. My main gripe is the lack of a robust, muscular sound. The sound here is a bit on the wishy-washy end of the scale. The music is not always good too. Half of this album is good to very good. The rest is a bit of a let down.

This is a good album which I feel is too long and does not have a good enough sound. This is still an interesting band and album, well worth checking out.