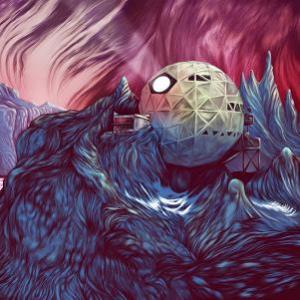 Their 2013 self titled debut was a good space rock album, showcasing a promising space rock band. A band now following up that album with their second album.

The band is a five piece band with a lineup of guitars, synths, bass and drums. There is no vocals on this forty minutes long album.

The music is simply space rock. Space rock with a pretty dirty sound. The band builds up massive walls of sounds on every track. That with the help of rhythm and lead guitars. The bass is thumping around near the bottom of the mix and the drums is underpinning it all. The synths is adding cosmic visions and ambience to the sound.

That is a simple recipe which works well. Add some post rock, guitar solos and a lot of groove. You cannot really loose with that kind of space rock.

There is no doubts the band knows what they are doing. The music is not overly interesting, but it still works. This is a good space rock album which will get this band a lot of fans. I would like some more spice and variations. But I am not a space rock head. Still.......