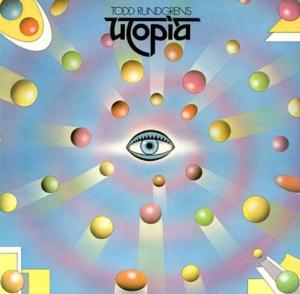 I have to admit I am not entirely familiar with Todd Rundgren, his career and creative output. What I know is that this band was a side-project from his solo career. It is most definate an artist I would like to explore in the future.

Todd Rundgren did the vocals and the guitars here. He got help from five other musicians with a lineup of cello, synths, keyboards, drums, bass and percussion.

Utopia was his progressive and psychedelic rock output. I would also say space rock. Something the now iconic artwork alludes too.

The album opens with an absolute epic track in the form of Utopia Theme which sounds like it was recorded live. Some great guitar, vocal and synth works is the recipe here and it is a truly superb fifteen minutes long track.

The two next tracks Freak Parade and Freedom Fighters are not that great. The closening track on this one hour long album is the half an hour long The Ikon. A very good half an hour, it is too.

This is perhaps not a great album. But it is an almost essential album as it has a lot to offer. I rate it as an eyeopener and a very good album. I will check out more albums from this band and the more proggy albums from Todd Rundgren's solo output.