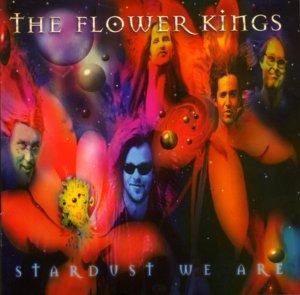 The Flower Kings is one of the giants of today's progressive rock scene and all their albums is must-haves. Both as reference sources and because of the quality of the music.

Roine Stolt, Hans Froberg and Thomas Bodin is leading this six piece big version of this band on this album. The lineup is the traditional keyboards, guitars, drums, bass and vocals setup.

This is a 2 CD album, lasting over 130 minutes. These 130 minutes is divided between long songs and a lot of shorter pieces of music.

The Flower Kings plays a Swedish folk rock influenced form of symphonic prog. Their sound is very easy to detect. They have indeed got their own sound and one sound a lot of other Swedish bands has both copied and developed. I call it the Swedish symphonic prog sound.

The album starts brightly enough with some The Flower Kings standards. In The Eyes Of The World. A very good song indeed. Both complex and catchy it is. We soon move on to one of their best ever songs, the very bombastic and majestic Church Of Your Heart. This is close to being a psalm. A Swedish psalm.

The rest of the album continues with a mix of shorter pieces and more rewarding longer song. The 25 minutes long title track is indeed a very good song too.

The end result is a very good album and one to really check out for everyone into symphonic prog. I think that is enough said about an album I have been listening to on and off for the last ten years.