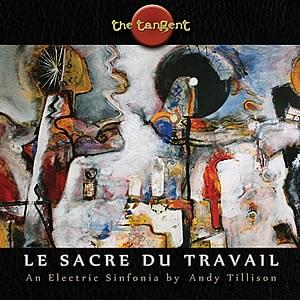 Or to be more precise; the band is now and has always been a multi-national band as the band leader & owner Andy Tillison has always brought in all available talents. People from The Flower Kings and from other bands.

So we get talents like Theo Travis, Rikard Sjoblom, Guy Manning, Jonas Reingold, Jakko Jakkszyk, Gavin Harrisson and David Longdon in addition to Andy Tillisson on this album. An album with saxophone, keyboards, drums, bass, guitars and Andy's vocals as the sound of The Tangent on this album.

This album is about working. A concept album about the futility of working and life anno these days. Something I can relate too, yes. I often wonder what I am doing.... and Andy Tillison has made an album about his similar thoughts.

This is an electric symphony in five pieces. My digi-pack version bought from Amazon also includes three bonus tracks. But I have omitted them from this review. My review is about this five movements symphony.

The five movements ebbs and flows. Not everything here is superb. The intro and the second movement has some superb stuff. Something of the best Andy Tillisson has ever written and recorded. There are some not so great stuff here too.

Nevertheless; this is a truly great album and one I really love. Maybe it is Andy Tillisson and The Tangent's best ever album. Hence my sprinkling of points.