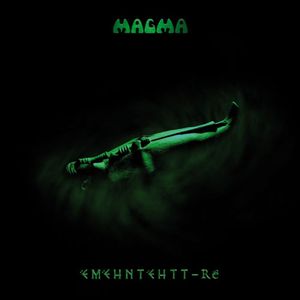 The kind of comeback album from Magma after some years in hiatus. It is their eleventh album in total too.

Magma finally went back to the more bombastic, darkened sound they had on their first albums. Although in a more stripped down version. They sounds a bit like Shub Niggurath on this album. That though with some funky and jazzy rhythms in the background. Ëmëhntëhtt-Ré is a pretty dark album with female soprano vocals and male vocals too.

I have to admit I have some reservations against this album. The music is simply not that great and it does not hit me in solar plexus as much as K.A and their earlier stuff. It is still a very good album though and I would recommend it.