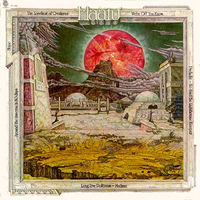 The second album from this rather strange Canadian trio. A band who many people thought were The Beatles in disguise. They were wrong.

On Hope, Klaatu goes concept album and a kind of a rock opera. It is probably a rock opera too. There is a lot of classical music here. There is also a lot of The Beatles anno Sgt Peppers Heart Club too. Not to mention The Moody Blues, Van Der Graaf Generator, Supertramp and ELO.

Hope is a very complex album and a very big piece of meat to bite over. Too complex and fragmented, many will say. I am missing some great songs here and a bit more unity in the material here. The classical music orchestration effect is also wearing a bit thin here. A bit more tidying up on the album and getting rid of the things that does not work would had done this album a lot of good.

My displeasures aside; Hope is one of the more undervalued albums out there. Ditto for Klaatu as a band. A band I rate pretty highly. Hope is a very good album which deserves a lot more listeners. Check it out.