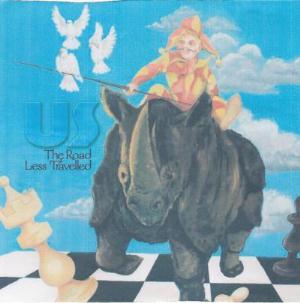 The ninth and last album by this Dutch band. Band is not a fitting description on Us though. It is more a one man band now after having lost some members due to sickness and other reasons since the first album was released back in 2002. Jos Wernars is now Us and is supported by his wife Marijke on vocals.

Us has always been somewhere between the likes of Genesis and Pendragon. That is symphonic neo prog based on vocals, keyboards, bass, guitars and drums. And this album follows that formula I have gotten used to since their first album. I got them all and have reviewed them for various magazines. That has been an interesting journey. A journey which has followed the same formula during the last albums. That's Jos playing all instruments, supported by a drum machine and his wife.

I have to admire Jos for really sticking to his guns. He is without any doubts one of the unsung heroes in the scene. Where anyone else, including myself, would had put their feet on the sofa and given up, Jos is still releasing albums. That with very limited resources and I guess; even more limited financial returns. Today's music scene is dog eat dog and I am not sure if Jos is really among the most cynical, nasty dogs out there. The type of dogs which survives.

I write this to remind you about the facts of the matter when I am now listing my views and gripes with this album. Jos is a true hero, but I still got a lot of gripes with this album. First and foremost the production which sounds thin and lifeless. Has this album been profesionally mastered ? I doubt it. The vocals is mostly suffering from this dull production which sounds like it has been run through a cheap & nasty piece of hardware.

The songs are not that great either and it feels like the Us formula has gone into a sidetrack and really become static for the last albums. Since Climbing Mount Improbable from 2008, in my view. The formula is long epic songs without much variations and details. It feels like all the epic songs goes down the same road. That impression is not helped by the poor production.

I regard Jos as one of the unsung heroes in the business. But this is not an album I like. It is a decent album though which has retained some of the trademarks which made Us an interesting band some albums ago. This album is not for me though.