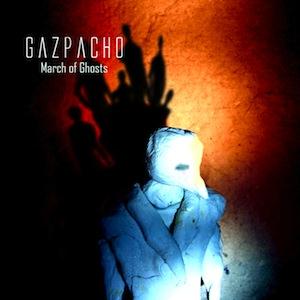 Gazpacho should not really need any introduction. One of the bands formed by Marillion fans (one of many... I have never understood why anyone finds Marillion post Fish fascinating), Gazpacho has gone their own ways and created their own little kingdom.

So we are in 2012 and their seventh album March Of Ghosts is out. Yes, it has been out for some time. But budget restraints has been plaguing me this year so I have not picked it up before now. I have been giving it a lot play during the last weeks. Both during some walks and indoors.

Gazpacho's kingdom/sound is a mix of post rock, indie and symphonic prog. Bands like Coldplay and Radiohead is prominent in their sound. So is Marillion too, but I am not holding that against Gazpacho. But when listening to a lot of the very interesting post rock around now (and band names I have forgotten), I also find a lot of that music in Gazpacho and in this album too. This album though is also branching into symphonic prog. Yes and Genesis springs to mind. It is not in your face, but the structures is there. Just listen to Hell Freezes Over I-IV. In particular # II with the fantastic final part which sounds like Breton bagpipes to me (it is violins).

Gazpacho has followed the path they set out on the previous album Missa Atropos and expanded their kingdom on March of Ghosts to more structured songs than before. This without loosing their original energy and sound.

In short; this is another great album from this Norwegian band. A band who surely is among the best European art rock bands at the moment. Hell Freezes Over I-IV is the best pieces here. But the best track is actually the rather understated Mary Celeste.

I really love this album and I believe it is their best album ever. If you have not visited the kingdom of Gazpacho before; this album should be your next stop.