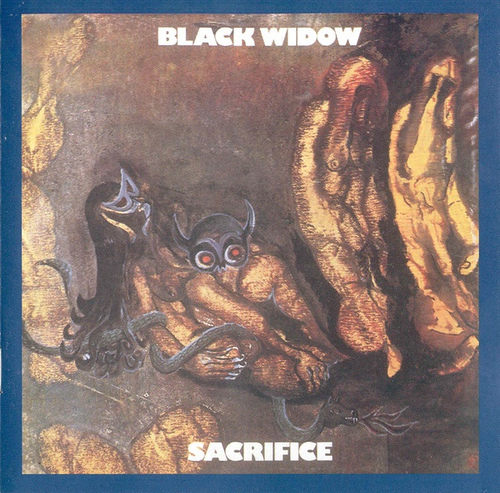 So this is it, then. The infamous and controversial debut album from this infamous British (socalled) occult band. I feel like Frost interviewing Nixon when listening to this album with the view to write something about it.

42 years has passed by and the world has witnessed a lot more shocking albums than this one. So let's leave the controversies & the silliness behind and rather go to the music.
Musical references are Jethro Tull and Vanilla Fudge. The music here is a mix of folk, rhythm'n'blues, soul and rock. Much more soul and rhythm'n'blues than I expected in fact. We are not talking black metal here. Far from it. That other Black band... Black Sabbath and their self titled album from the same year (1970) were far heavier than Sacrifice. The music on Sacrifice is good rhythm'n'blues with a lot of good melodies. But Sacrifice were not breaking any new ground in 1970 with the exception of the lyrics which is on the rather occult side. Naive occultism, that is.

The song Come To The Sabbat, the controversial song and the best song on this album, is rather naive. But it is also a great song too with the great flute as the crowning glory. The other songs are not in the same class. But this is still a very good album which really has vetted my appetite for this band.

Sacrifice was re-released as Return To The Sabbat in 1998, btw. I will review that album and all other Black Widow albums in due time.
Posted by Torodd Fuglesteg at 20:07