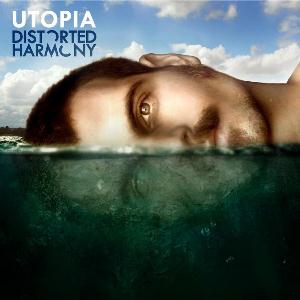 Once in a while; an album comes along which proves there is still life in the old dog, the music scene. This is one of those albums.

Distorted Harmony is from Israel and this is their debut album. Israel means the middle east and all those stereotypes. Orphaned Land has released some (excellent) albums with a lot of eastern and middle east folk music influences incorporated in their progressive metal sound. Other bands from Israel has done the same too. Distorted Harmony has not gone down that route, though.

Distorted Harmony is a progressive metal band who has incorporated a lot of other influences too. The middle east folk music is not one those influences though.  Distorted Harmony could easily had been mistaken for a Canadian, US or a Norwegian band. Their sound is universal. Their brand of progressive metal (performed by guitars, tangents, sampled symphony orchestra instruments, drums, bass and vocals btw is not run of the mill, though. The song structures on Utopia has been lifted from the symphonic prog scene. The likes of Genesis, Yes and Kansas. Add some structures which reminds me about Gentle Giant too. Their guitar riffs is in the progressive metal tradition aka Dream Theater. Their guitar harmonies is in the Muse and the post millenium art rock scene. The vocals sometimes reminds me about Morten Harket in A-Ha. But the vocals is more akin to Muse though.
The opening song Kono Yume sets out the stall and the album culminates in the twelve minutes long title track.
My only gripe is the lack of a true killer track. A track which would had elevated both the album and Distorted Harmony to another galaxy again. But this is still a stunning great album and close to being a perfect album and my favorite 2012 album, so far.