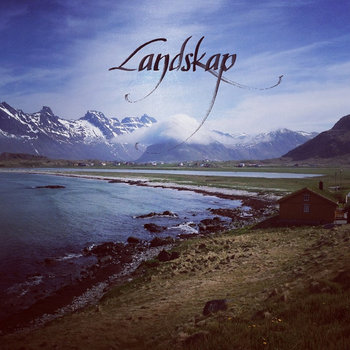 The debut album from this London, England based band.

Well, the band sounds like if it was from Birmingham instead of London. And we are then talking about the four guys from Ashton Lane or thereabout. Black Sabbath, that is.

Landskap, whose album artwork features a Norwegian sea & mountains landscape from Ytresand (Fredvang) in the Lofoten Islands (I have been there), has really gone back to the roots of heavy metal. Some labels this as stoner rock. I label it as good old heavy metal from 1970. Add a large chunk of krautrock to this and you get this four tracks, thirty-two minutes long album.

The band does a lot of krautrock improvisations and jams on the two ten minutes plus long songs. That goes down well in my office. The two shorter songs also has their good points too. The sound is dirty enough to compare it to garage krautrock and to Black Sabbath. The sound is both full and really welcoming dirty. Dirty as in good mud where we swines can wallop and enjoy ourselves. The band also venture out into outer space too with some of the guitar solos. Distorted and really outer space rock 'ish. The bass and drums thunders along like a heavy truck. The vocalist adds some more dirt to the proceedings too. We swines are really having a great time here, covered in dirt as we are.

The songs are very good too. A killer track or two are much missed. But as a debut album, it is hard to fault it. This band is a very welcome addition to the garage krautrock and the doom metal scene. Now, let us find out why some presumed sound minded guys from London has chosen to use this Norwegian word for a venture like this.


....And the album is a Name Your Price download too.