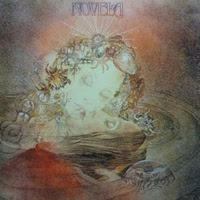 The debut album from this Japanese band who went on to release eight albums before they split up. Eight albums in six years.

Novela was considered as being a symphonic prog band. One of the better Japanese symphonic prog bands too with a penchant for ELP. That may be true too... The first minutes of this album is pure Japanese heavy metal though and it takes me back to the likes of Loudness and bands I would rather forget. A strained to breaking point male vocals on the top of some third rate heavy metal. I cringed. The album then moves more into a more symphonic prog landscape with lots of synthesizers and an ethereal soundscape. But this album returns to the heavy metal themes on a sporadic basis.

The heavy metal stuff is pretty dire, but some of the symphonic prog stuff has some good melodies. The end result is a decent debut album and my loss of interest in pursuing other albums from this band. I am not impressed by La Songerie.