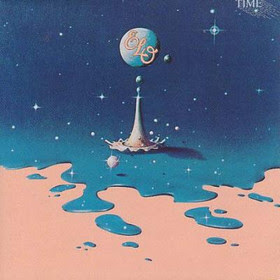 Their tenth album if Xanadu is included.

Electric Light Orchestra have moved on from being The Beatles younger brother and have embraced the sounds and music of the final half of the 1970s. That means disco and bubblegum pop music. Which there is plenty of on this album.

Gone is most of the classic Electric Light Orchestra sound. A sound I really like. It has been replaced with some plastic fantastic sound and noises. Like for example disco rhythms and pop music. Something I am sure pleased the commercial audience they were catering for at that time. Only a couple of classic Electric Light Orchestra sound songs can be found here, Ticket To The Moon being one of them and an album saver. Besides of that.... there is not much fun here.

This is a decent album. But the end of the road were approaching and this is not an album I want to remember Electric Light Orchestra for.