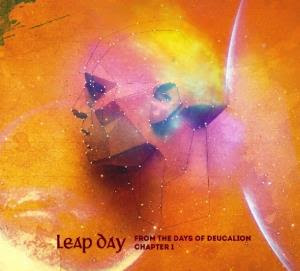 The third album from this Dutch band and my first ever meeting with their music. It seems like I am sharing this experience with quite a few people. I think it is fair to say that From The Days Of Deucalion, Chapter 1 is their breakthrough album. Well, at least in this small scene.

Leap Day plays neo prog and of the more traditional style. Tonnes of keyboards, guitars, drums and bass is supporting a vocalist who sings in a more traditional heavy metal style. Jos Harteveld's vocals has a wide range and is one of the great assets of this band. Vocals that sets them apart from most of the scene.

The album "only" clocks in on fifty-five minutes. Which is long enough for this type of music. I was fearing a seventy-five minutes long opus where half of it was time wasting. This is thankfully not the case here. Leap Day and this album is by no means wasting my time. After a bit of a slow burning start, we are in the middle of a symphonic neo prog landscape. A type of music which ebbs and flows a bit between big soundscapes and some ambient breaks in the cascades of music which bombards the listener. A great recipe, btw.

The end result is a great album which has a lot of great melodies, hooks, riffs and details to enjoy. The mix between guitars and keyboards is just about perfect. Leap Day has also forged out their own style and identity and it is pretty clear I need their two other albums too. Fans of neo prog and symph prog must check out this album.