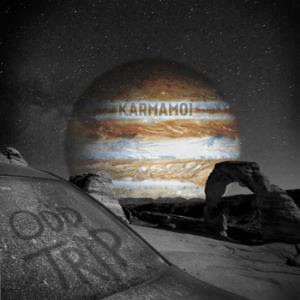 Karmamoi was formed in 2008 and released their self titled debut album in 2011. Their female vocals gives them a bit of an identity in their scene. Their music is very much influenced by the likes of Tool and other more contemporary hard rocking bands.

Their music is not quite heavy metal either. I would compare them to Garbage, the once so popular UK band who did the title track for the James Bond movie The World Is Not Enough back in 1999. They were pretty popular back then and is still alive. Karmamoi is in the same mould, although not that popular.

Add their edges with chugging guitars and great female vocals.... and you got Karmamoi. A band not afraid to also include a tender ballad on this album too in addition to some cyber hard rocking tunes with chugging guitars, samples and electronica, bass, drums and keyboards. The contrast between this ballad and the rest of the album is huge.

That makes for a very varied album who should appeal to anyone into contemporary hard rock with lots of melodies and hooks. Unfortunate for Karmamoi, this album comes up short when it comes to commercial tunes or even great tunes. I am afraid obscurity still beckons.