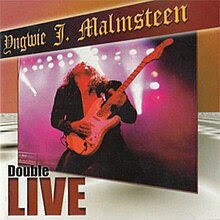 The second live album by this larger than life character Yngwie Malmsteen.

Yngwie Malmsteen builds up everything around his guitars. A guitar sound who sounds like two fighting cats. It is best enjoyed in small dosages. This 100 minutes long live album is most definate at least 90 minutes too long with this crappy sound. It is not helped by the bad sound either which really gets to me and makes it impossible to really enjoy Yngwie Malmsteen's music.

In short; this album is a rip off and I have been royally ripped off.