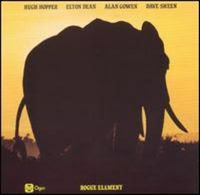 The name Soft Head and this live album was a one of deviation from their group Soft Heap. The original drummer Pip Pyle had to pull out for this gig and Dave Sheen replaced him. Hence the change of name to Soft Head for this gig. Strange, but that's how they did it back in those days.

Soft Head/Soft Heap was a supergroup which consisted of Alan Gowen (tangents), Elton Dean (woodwinds), Hugh Hopper (bass) and Pip Pyle/Dave Sheen (drums). The list of bands they have played in is very long. But the name Soft Heap gives associations to Soft Machine and that is why I got this album.

It is fair to say that their music lands somewhere between Gilgamesh and Soft Machine. The music is not as intense as Soft Machine and not as laidback as Gilgamesh.

Elton Dean is the main soloist on this album. But Alan Gowen also have some brilliant solos too besides of working away in the background and proving how great musician he was. Dave Sheen and Hugh Hopper holds it all together in the background.

The music is really superb and a timely reminder why Canterbury jazz was such a great movement. All the musicians here, bar Dave Sheen has passed away and this time will never return again. But just hearing the interplay between these four great musicians fills me with awe and wonderment.

The best track is Seven For Lee on a live album with both swinging jazz tunes and intense ballads. They don't make music like this anymore, I am afraid.