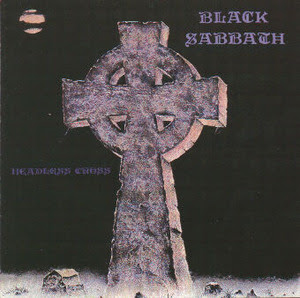 The band previously known as the godfathers of heavy metal returns again.

Gone is their good style from the 1970s. Bands like Trouble, Candlesmass and others would steal their 1970s sound and make a good career of that. That is why it is so sad to listen to albums like Headless Cross. Black Sabbath anno Headless Cross is twenty on the dozen AOR influenced heavy metal band. They tried to play on an occult image, but also that fell flat on it's face.

Headless Cross has one good song, the title song, and a very good vocalist in Tony Martin. It is also a pretty heavy album which tries to incorporate the heaviness of Paranoid into this album. But is mostly falls flat on it's face. The songs are pretty dire and lacks any imagination whatsoever. Hence my score.