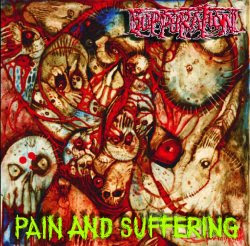 There are some death metal/grind core so bereft of any qualities that it only survives on the shock factor. This album is one of them.

The song titles and album cover is a nice way to cover up ineptitude. The production is really horrible with the guitars too far back in the mix and the highly annoying drums, which sounds like heavy rain hitting the windshield of a car, is too much in the front. The vocals too is buried in the mix and I have no idea where the bass is.

The music is more towards grindcore than death metal from this Colombian band. This album is very short, clocking in at just over twenty minutes. It is a rip-off in my view, unless you are a diehard grindcore fan.

Avoid this album at all cost.