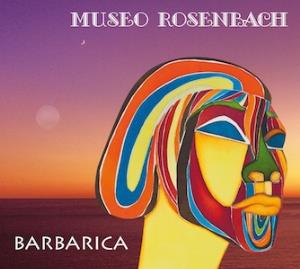 Their third album and the first studio album for thirteen years. The purists would say this is their second album though, Zarathustra from 1973 being their first/other album. Their Exit album from year 2000 was without Stefano Galifi, the vocalist who makes this band. Something he demonstrates on Barbarica. Museo Rosenbach without Stefano is like a hospital without patients.

Stefano has returned to the band again after his excellent stint with the new, upcoming Italian band Il Tempio Delle Clessidre. A band who took their name from a Museo Rosenbach song and was by all intents and purposes a tribute to Museo Rosenbach. Their album is brilliant, btw. I just needed to get that one into this review. Point made; Barbarica is another great album graced by Stefano's excellent vocals. It is an album who really sets out the Italian symphonic prog agenda. It has tonnes of moog, melotrons and Hammond organs. It also has tonnes of guitars, bass and drums. The music varies between heavy and pastoral lyrical. Between folk and hard rock. Just like a great Italian symphonic prog album. The songs are long too. The music is rooted in the 1970s. The album just clocks in on forty minutes. Just about long enough, in my view.

I really like the songs and I really like the sound. The opening song Il Respiro del Pianeta is the best song on an album which has no weak track and nothing but greatness. Welcome back guys and thank you for this album. I love it.