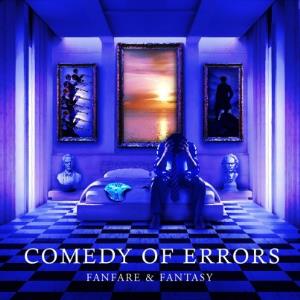 Despite of living in the same area as this Glaswegian band comes from, I have never really rated this band. I never really fell for their 2011 Disobey either. Their self titled 1988 debut album is best forgotten. It has also taken me a lot of time to get into Fanfare & Fantasy too. Perhaps far too much time.

We are knee deep in neo prog here. Neo prog from the 1980s. They are veterans from the scene, following in the wake of the likes of Pallas and other Scottish neo prog bands. They were mainly opening for those bands back in the 1980s. Then life happened, the band members had to sort out their respective lives. Which they did. Then they found out that they had unfinished business and the band reformed again. I guess this is what happened. That explains the rather not so great Disobey and this album. A far better album.

Comparing Disobey with Fanfare & Fantasy; the sound is the same. The songs on Fanfare & Fantasy is far better though and I get the feeling the band is now up to full steam. Probably more so now than in the 1980s. Style wise, they sounds like a mix of Pendragon and Genesis. Melodic, symphonic neo prog in other words. I like their keyboards and guitars interplays. Great stuff. Ditto for the songs here. I am still not comfortable with thin, light vocals like Joe Cairney's vocals. That is a personal preference though. His vocals cannot be faulted though.

I am not a big fan of classic 1980s neo prog. This music is like symphonic prog without the brains. But Fanfare & Fantasy is one of the few albums I really like from that scene. Hence my weak, weak great award.