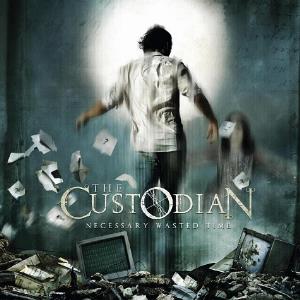 The debut album from this new English band, released through Laser's Edge. Also heavy backed by the same company with promo copies sent to, amongst others, this blog too.

Heavy promoted with good reasons. The Custodian is run by Richard Thomsen from the prog band Xerath. Which does not tell me anything. The stated intent of trying to create a fusion of the best of the 1970s prog on this album does tell me a lot though. Hence the band name, I guess. A fitting band name too.

What meets the listener is a wall of sound which first reminded me about the first King's X albums. And that band and their great albums is my main reference here. I really like the first King's X albums, btw. So that is a compliment. The difference is that The Custodian is not as hard edged as their US brethren. Their sound is much more based on the 1970s psychedelic rock sound. The Custodian also use a lot of Hammond organs too. That and airy electric guitars. The guitars is not chugging as in metal riffs. They are much more airy and flowing. The same goes for the vocals. This reminds me a lot about Porcupine Tree on their most melodic. And yes, there is a lot of Steven Wilson & co here. Fans of his projects will lap up this album. Ditto for the many Rush fans out there. The Custodian owes Rush a great deal.

Most of all; this album sounds as fresh as fresh fruits and vegetables. The sound is in short brilliant. The songs are not superb though. This album is missing a killer track or two. But this is still a great album and agree with their record label's beliefs in this band. This is truly a remarkable debut album which I am sure will raise a lot of eyebrows. It has certainly given me a big smile during the last two weeks. Come summer, come The Custodian.