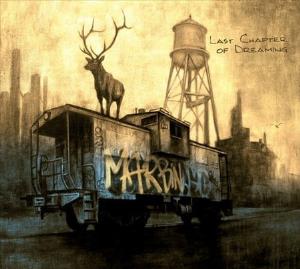 The third album from this Israeli fusion band.

Marbin's second album Breaking The Cycle from 2011 (I have yet to sample their first album) was a pretty untraditional album with a lot of Israeli folk music fused into their brand of fusion. The band very much continues on the same path on Last Chapter Of Dreaming.

I am not so sure if the music here can be labelled fusion at all. It is either jazz or crossover music. The crossover is between folk music and jazz. There is a lot of folky tunes here, given a bit of a jazzy overhaul. The music also has a lot of Mexican tijuana feel over it too. The music is performed with guitars, saxophones, bass, keyboards and drums. The music is instrumental.

The music here is by no means exciting and I feel the band has taken a very easy-way-out route on this album. The music is also pretty light on technical details. It feels like it is a jazz-lite album. The longviety of this album is short, I fear.

I still think this is a good album. The melodies are good. But it has it's limitations and the band has not fulfilled my expectations with this album.