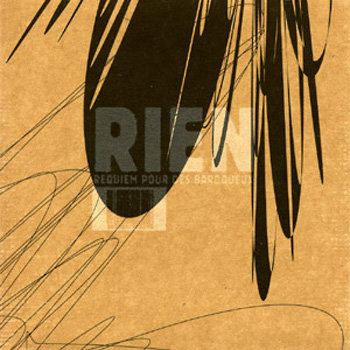 The first of three albums from Rien, now made available through Bandcamp too in addition to being a free download from their label's website too.

Rien is a French band and they deliver some pretty eccentric music too. Their music is difficult to describe and is not helped by this title track which last over thirty minutes, split into two parts. The first part is twenty two minutes long and it is eclectic, to say at least. Gosh, where do I start ? What comes to my mind first is that this album has the same ambience as Focus' masterpiece Hamburger Concerto. In particular; La Cathdral De Strasbourg and the title track. That though is the only comparisson I will make with Focus. The music itself on Requiem Pour Des Baroqueux is orchestral kind of post rock, mixed up with krautrock and avant-garde. The music is also pastoral and is softly spoken.
The main instruments are acoustic guitars, woodwinds, tangents, bass and drums. Vocals are sparsely added too. Most as sound effects though. I suspect there is a lot of samples here. The sound is excellent.

The title track, both parts is great. The five other shorter songs are not in the same league though. But this album is still an album which draws the listener in. It needs a lot of time though. My only gripe is the lack of a couple of more great songs. But there is no doubts this is a very promising debut album and I am eager to hear more from Rien.