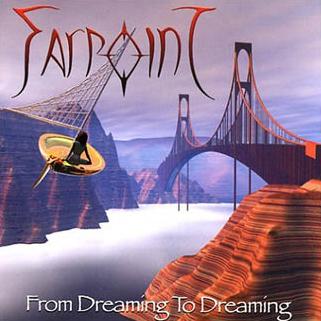 Their third album and my first introduction to their music.

Farpoint is a progressive folk rock band from South Carolina, USA. On From Dreaming to Dreaming, they comes across as a mix of Mostly Autumn and Pink Floyd. That and a solid slant of AOR too. They use both female and male vocals. The music is also very much guitars and keyboards orientated with some Pink Floyd like guitar solos. The bass and drums has a pretty standard sound without really over-working themselves. The sound is therefore pretty OK.

The first songs are pretty poor with some throwaway songs which sounds banal and frankly; cheap. I did not look forward to the final half of the album. The album improves radically from the sixth song Crying In The Rain and it really takes off a bit. Though with some country'n'western influences. Yes, Farpoint is from USA and what would come across as celtic folk music in Mostly Autumn's music comes across as country'n'western in Farpoint's music. That is natural. So my instinctive hatred towards country'n'western (or Americana as it is now officially called) is being subdued. That aside; the final songs are good and the band clearly has something to offer. So much that I will move onto their next albums.

This is a pretty good album who just creeps in to the good category.