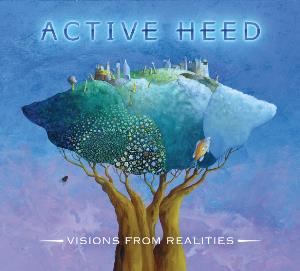 The debut album from this Umberto Pagnini lead Italian project. A project which also include Mark Colton from Credo and some others. That include the Norwegian vocalist Mari Borresen.

Umberto Pagnini is using the Active Heed name as his vehicle. The music most of all sounds like a singer-songwriter project and he could have released it under his own name. Neither Bob Dylan or Bruce Springsteen suffered a career meltdown, using their own name when they released their singer-songwriter albums. But releasing Visions From Realities under the Umberto Pagnini name would had brought clarity to this proceedings. Proceedings which essentially is a pop-rock album with some hints of prog rock.

Umberto's vocals is dominating here, sometimes helped by Mari and Mark. They are backed by guitars, bass, drums and synths. The sound is very much contemporary. Umberto's vocals are great and the music is built around them. Which again makes me wonder why he did not release this album under his own name. I would had done that.

The quality of the songs are good. What makes this album slightly uninteresting is the generic pop-rock sound with generic acoustic guitars sound. It is a sound done by many other singer-songwriters this year. I would rate this album somewhere between decent and good. I would still wish Umberto good luck and note that I am not among his target audience.