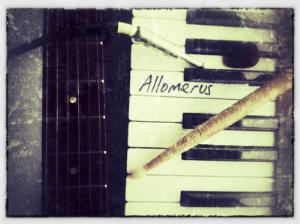 The debut album from this Australian band.

Allomerus is a band who operates between King Crimson, electronica, post rock and ambient avant garde rock. The song structures is fluid to say at least. The only song of note here is at the end of this one hour long album, well after the listener has given up hope.

The reason for the lack of enthusiasm is the frankly very dull and uninspiring music on this album. Ambient avant garde rock is good when the music has any purpose and is well made. That does not really applies to this album. As this is a debut album, it sounds like the two musicians is still trying to find their way and their purpose. They are seeking high and low on this album without really arriving there. There are some good music here, very sporadic good music. I also like the depressive soundscape on this album which reminds me a lot about the vastness of the Australian landscape. But there is not enough good here to interest me.

Check out the album on the link below and find out if you agrees with me.