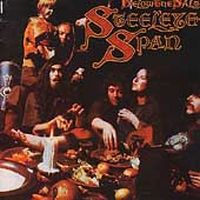 The band was a five piece band on this album with a lineup of fiddle, banjo, mandolin, piano, guitar, bass, tabor and vocals. Tim Hart does the male vocals and Mandy Prior the female vocals.

There is no drums here and the founder of the band, Ashley Hutchins, had also left the band.

Steeleye Span was one of the best and most prolific folk-rock bands in the UK and the world during their time. The band is still a bit alive with new albums and gigs now and then.

The band is expanding a bit out from their folk-rock roots on this album. There is some blues, psychedelic rock and some progressive rock on this album too. That after a very traditional first half of this forty minutes long album. That part is good folk rock. Though with some blues too.

The more progressive rock and psychedelic rock pieces is experiemental. But they are still very much in tune with what this band stands for. These pieces does not feel out of place on this album.

It is obvious that the band is not content with being "only" a folk rock band. They are soaking up blues and prog rock here. Not to mention psychedelic rock. All these four elements are being distilled into this album.

The only thing this album is sorely lacking is some more good music than what we get here. This is a decent enough album. But not good enough in my view. This is still an album well worth checking out.