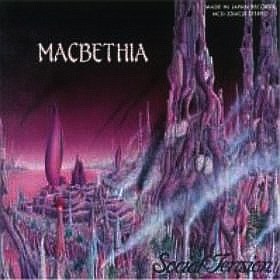 The band released two albums before they split up. Two album which is widely regarded as some of the best ever prog rock albums from Japan.

The band had adopted the ELP lineup on this album. They were a trio and the lineup was bass, keyboards, vocals and drums. Just as in Emerson, Lake & Palmer..... ELP.

That is not a coincidence. 20 years after the first ELP album saw the light of day, the band is more or less going down the same route.

More or less as this album is not a copycat. Neither is the band any copycat.

The sound on MacBethia is pretty big and bombastic. There is also some jazz, pop and a lot of Japanese classical music here too. The few vocals, male vocals, around here is in Japanese. That alone adds a lot of interest to this album.

This album is almost fifty minutes long album. The pop stuff here is pretty psalm like and eerie. Although I don't understand a word of these vocals, I understand the sentiments expressed there. It is that eerie.

This album suffers a bit from keyboards for the sake of keyboards. There is lots of it. Lots and lots. But the music is still interesting and this album never really becomes dull or uninteresting. It is an album I like a lot. There is no great songs or even great pieces of music here. But this is still a good album, well worth checking out.